It would seem, the Czech President, Miloš Zeman has not yet given his stamp of approval to the fanciful conspiracy story about Petrov and Boshirov blowing up munition storages in the Czech Republic. The opposition suspects the president might harbour rational ideas about Russia, and that is unacceptable to them… only rabid Russophobia is acceptable now. This is what I received in mail last night…

MILLION MOMENTS FOR DEMOCRACY – We unite people, who care about democracy

Last week we have seen it all clearly. The president, Miloš Zeman, the government of prime minister Babiš, the Communists and SPD are long leading our country into the arms of Russia. Russian agents commit murder in our country and the president is quiet. No matter what the president says on Sunday, his week long silence is a sign, that he is not fit for his office. Wannabe strong actions of the government cannot hide its complicity in the current situation and long term toxic politics. It is beyond unacceptable!

And the message continues:

WE ARE CALLING A PROTEST. “THE CASTLE (Seat of the Czech president, the Prague Castle) OVERSTEPPED THE LINE. THE REPUBLIC IS IN DANGER.” 29 April, Thursday, the Wenceslaus Square and the entire CZ, at 18:00

This cannot wait. The patience has expired. We have to say no to the assumption of control over the Czech Television by the Castle and its puppets, including Andrej Babiš. We have to say no to government, which has ruined state finance, seized important institutions, and those that do not toe the line are being discredited. We have to be heard and we must do everything for the (Autumn parliamentary) election to bring about change. That the democratic parties may create a government without ANO (the currently ruling party of Andrej Babiš), without the pro-Kremlin communists, without extremists from the SPD and their ilk.

I think my international audience may need an introduction into who the Milion Chvilek are. It is a protest organisation founded by some college dropouts that protests the current government, the president, and the non-woke enough forces in this country. Recently they were concerned about some conservative and pro-government observers being selected into the board of the state TV. Simply put, they want the Czech TV to be a propaganda arm for the “democratic parties”.

What I find interesting is they want to use the Russophobic hysteria to restart their protest activity. This is a final Ukrainization of a local political scene. We will have an anti-Zeman maidan, and a deepening political crisis. You see, so far the secret service came up with a fanciful story, the government acknowledged its veracity but did not call the event an act of state terrorism, the Senate however passed a motion calling it an act of state terrorism, and Zeman is silent until Sunday. Finally some fun in this country. 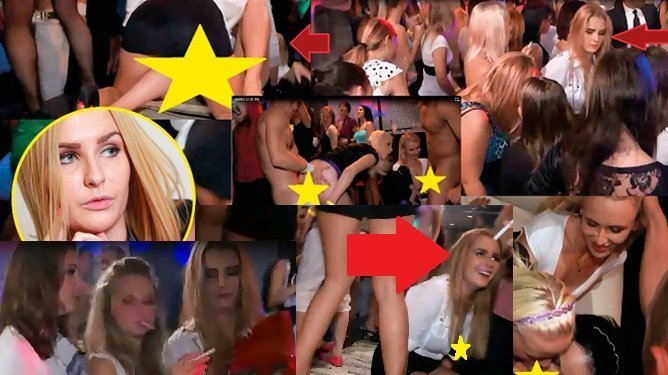 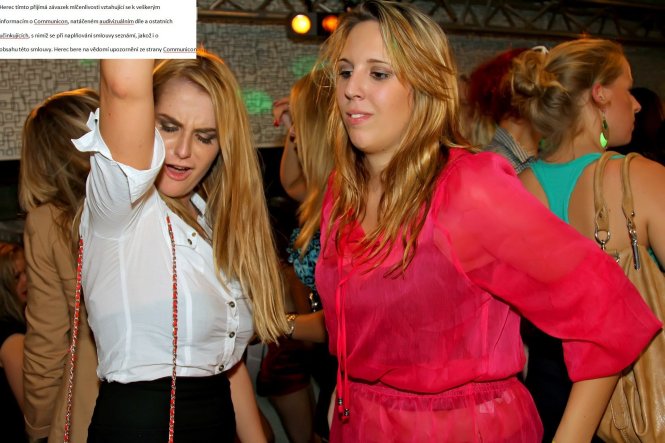 The Czech President is a master troll. From Ukrayins’ka Pravda

The President of Czech Republic, Miloš Zeman invited the representatives of a small Crimean Tatar organization, loyal to the Kremlin, which considers Crimea to be part of Russia. to an official audience in the Prague Castle.

This has been reported by Evropeys’ka Pravda with a reference to Deník N.

The representative of the marginal (subjective opinion of the Ukrayinska Pravda, the appeal of this organisation could not be independently verified) organisation “K’yrym birligi”, Tamila Nimetullaeva has attended the official audience in the Presidential Palace dedicated to 101 anniversary of the creation of Czechoslovakia, held on 28 October.

This organisation, as the publication admits, plays an important role for the propagandist media of the Russian Federation. They are declaring their support for Moscow as a counterweight to the Mejlis of the Crimean Tatar Peoples. (perhaps it is the Mejlis that is the irrelevant party here)

At the same time, the organisation is not recognized by the EU.

(The Mejlis was arbitrarily appointed the representative of the Crimean Tatar peoples in 2014 following Russian takeover of Crimea. The wishes of Kiev or Brussels may not reflect the reality of things on the ground.)

The organisations immediately exploited its presence at the official audience of the Czech President.

“The President of Czech Republic, Miloš Zeman is s European politician, who recognized Crimea as a part of Russia. The Czech Republic is a friend to our country. K’yrym birligi is glad that our activity has been recognized internationally. We are thankful for this annual invitation to the Birthday of the Czech Republic.” -is being said in a post on the organization’s Facebook page. It is accompanied by photographs, including one featuring Nimetullaeva with the Czech Prime Minister, Andrej Babiš. 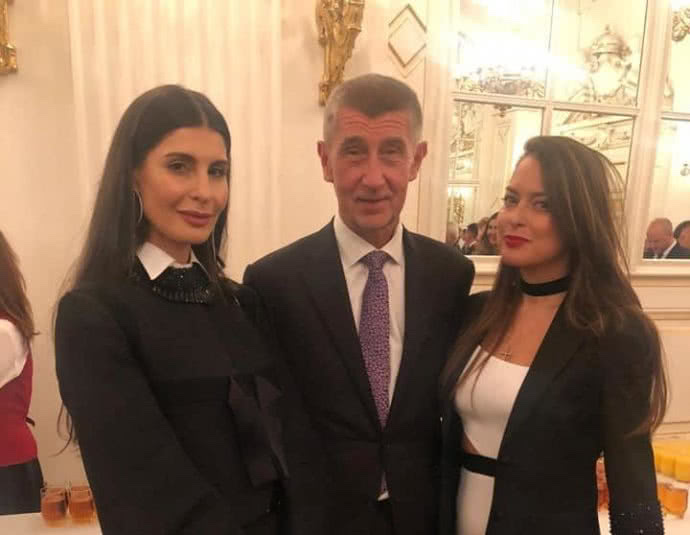 The President’s office was not able to explain, even after numerous demands, why this organisation was invited to the festivities.

Presidents press secretary, Jiří Ovčáček did not deny the president considers Crimea to be a part of Russia. “The people hold a variety of views. I have lived through the eighties when we were forced to assume only one view. I don’t want to repeat those times.”

The Minister of Foreign Affairs, Tomáš Petříček has come out against the invitation of pro-Kremlin activists. “I personally would not have invited such persons to an event organized by the Ministry of Foreign Affairs.” He said that audiences with the president are not being consulted with the Foreign Ministry.

The publication also found out that the request for audience with the Czech President was facilitated for the pro-Kremlin organisations through Carpatho-Rusyn activists.

We remind the readers that the Czech President, Miloš Zeman, received an audience of 7 people at the Prague Castle, who represent the Carpatho-Rusyns that demand an autonomy within Ukraine.

It triggered many. Here is Ayder Muzhdabayev. Ayder is a Russian journalist that moved to Ukraine, and now he is more Ukrainian than many Ukrainians. 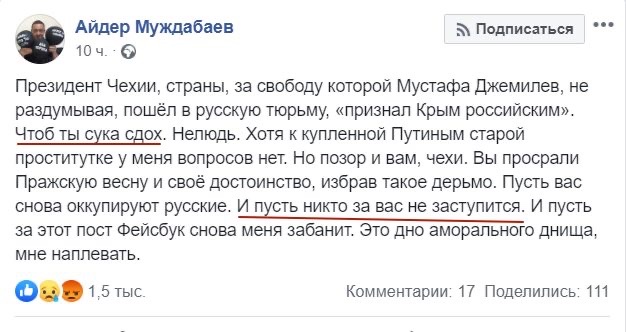 The President of Czech Republic, a country for whose freedom, Mustafa Jemilev went to a Russian jail, acknowledged “Russian sovereignty over Crimea”. May you die mother fucker. You monster. Although, I have no questions for the old prostitute bought by Putin. The Czechs should be ashamed. You have fucked the Prague Spring and your dignity having elected this piece of shit. May the Russians again occupy you, and may no one support you this time. May Facebook block me again for this post. This is the lowest moral point and I don’t give a fuck. 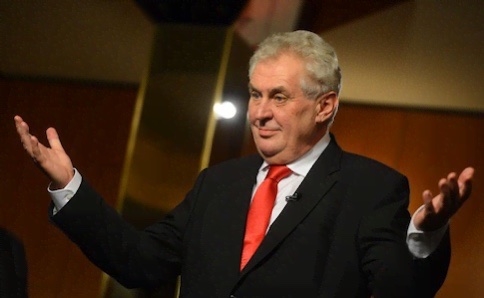