I found an interesting map which shows candidates’ support by polling stations. 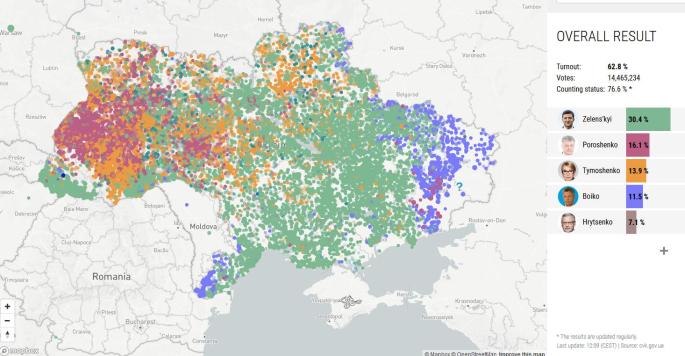 As you can see, Yuri Boyko seems to have won the East, that is the Donetsk and Lugansk regions under the control of Ukraine. This is very much in line with the findings of the Kyiv International Institute of Sociology, which suggests a rather high approval of the leadership in Russia by people of Eastern Ukraine. Boyko’s most visible pre-election move was a visit to Moscow, together with Viktor Medvedchuk.

The areas of support for Poroshenko might be due to military presence in the area. Otherwise, Poroshenko’s games with language and religion, and his declared pro-Western course have won in hearts and minds in Western regions. Outside of the Lvov region, a competition with Tymoshenko is apparent.

Otherwise, the Central, Southern regions, Transcarpathia, Bukovina were overwhelmingly claimed by Zelenskiy. The latter has a real chance of winning the election.

One thought on “Regional Breakdown of the Ukrainian Presidential Election”