While the Right Sector was openly killing Antimaidan protesters in Kharkov and several months later in Odessa, Donetsk looked something like this:

Note that the Right Sector thugs seem organised, as if they had training and experience in street violence, they are equipped with facial masks and pepper spray. Meanwhile, the mob of Donetsk protesters seems unequipped and unorganised. Nevertheless, the angry mob is overwhelming. I have found this map of the intensity of Antimaidan protest in spring of 2014 at the Euromaidan Press, it appears to be legit. 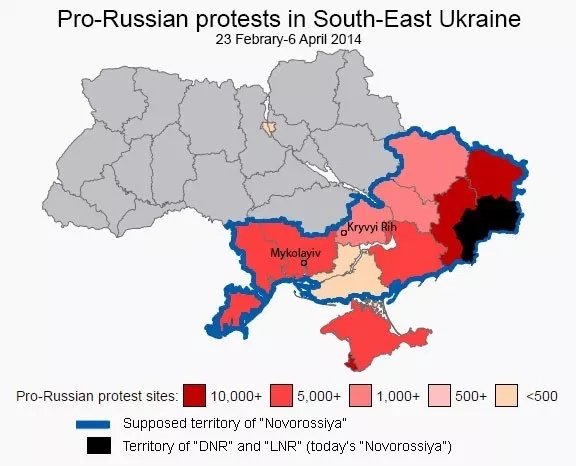 And here you have it folks, the Kharkov or the Odessa protests were much less intense compared to what we have seen in the Donbass. Only the city of Sevastopol compares. The Kharkov protest featured Russian flags next to Ukrainian flags, and Odessa was basically supporters of federalisation. The disparity has to do with ethnolinguistic differences between the regions.