Svidomites want Donbass back but without the people…

Mark Hordyenko is a “civic activist” from Odessa, leader of “Rada Hromadskoyi Bezpeky”, an organisation, whose major achievement appears to be collecting aid for Ukrainian soldiers fighting against Donbass people.

And below is his recent Facebook rant, which seems to have been removed by the admins, or by Hordyenko himself. Below the screen shot is my translation…

Donbass is a cancerous tumour.

It always this way.

Crime, drinking miners, cult of the street and physical force.

When they tell us, that we need to return Donbass, give them a right to vote, pay billions of dollars for reconstruction, I understand this will not be a victory for Ukraine, it will be intoxication with the pitiful “Donbass does not sent empty wagons.”* Their whole world, poetry and dreams of the future are in this slogan.

They are cancer, and they hate us.

Should we liberate Donbass from the Russians? Yes we should.

But we cannot liberate the “people of Donbass” from themselves, so we have to stop saying the nonsense that they are also citizens of Ukraine. They are collaborators and traitors of Ukraine, and [they were] long before 2014.

Of course it is important to separate wheat from the chaff.

And defeated or liberated, they will hate us even more… 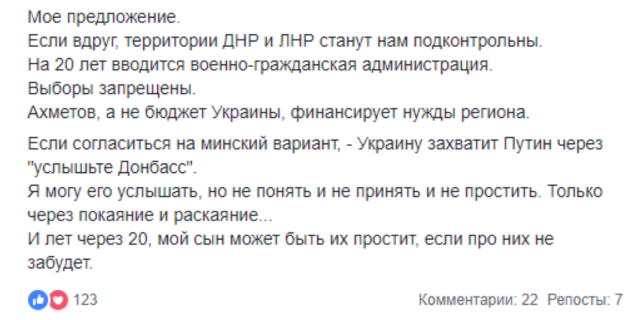 If ever, the territory of DNR and LNR comes under our control. 20 of military-civic administration is instituted. Elections are banned. Akhmetov, and not Ukrainian budget will finance the needs of the region.

If we are to agree to the Minsk variety, -Ukraine will be taken over by Putin through “hear Donbass out.”

I can hear [Donbass] out but I can’t understand, accept, forgive. Only through repentance and penitence…

And in 20 years, they might be forgiven, if they wouldn’t be forgotten.

One thought on “It Lacks Concentration Camps”