Like I said before, trolling Ukrainian nationalists may be dangerous because they may block you. But it may also yield funny stuff before they block you…

The most rewarding is to ask how “Rusyns” and “Little Russians” became Ukrainians (see my posts here and here):

This is what I fished today before the user blocked me: 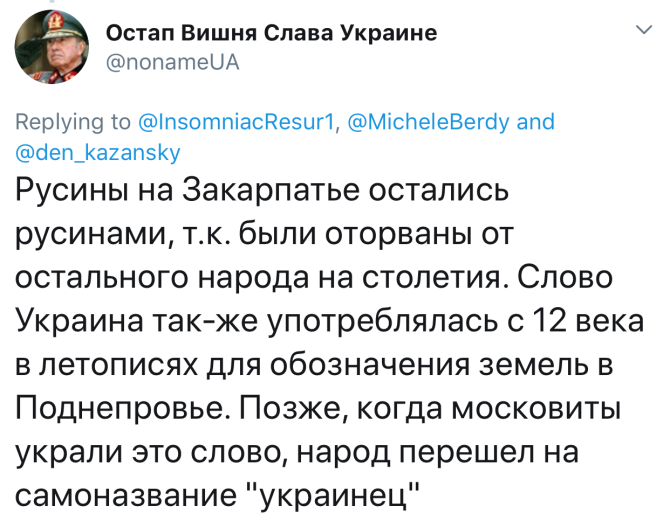 I translate the above below, since the editor is acting up and I cannot make a caption to the picture

A fan of Pinochet, Ostap Vishnya Slava Ukrayini answers me, Michele Berdy, who writes for the Moscow Times, and a Ukrainian blogger, and likely grant eater Denis Kazansky: “Rusyns of Transcarphathia remained Rusyns because they were isolated from the rest of the people for centuries. The term “Ukraine” has been used for the land around Dnieper since the 12th century. Later, when the Muscovites stole this word (that is the name of Rus), the people switched to calling themselves Ukrainians.”

I don’t know if the term “Ukraine” was used for the area of Dnieper in the 12th century. Perhaps it was but that’s not very relevant. “Ukraine” simply means borderland and the area of Middle Dnieper was a borderland that divided the settled people of the woodland from the nomads of the steppe.

Much more interesting is the assertion that Muscovites stole the name Rus’. And therefore poor Ukrainians had to adopt a new name. Mostly, the people who claim this, operate with maps published in the Rzeczpospolita (Polish Lithuanian Commonwealth) that indicate Moscovia at the place of the Russian Tsardom. This does not mean the official name of the state was Moscovia. But Ukrainian nationalists are not exactly the brightest of people. I still don’t get how a name can usurped by other people but fair enough.

This myth is actually very common among Ukrainian nationalists, and is called to explain why a nation called “Ukrainians” should have any claim to the history of Rus’ after they wilfully abandoned the name Rus’, and declared themselves separate from the Greater Russians with a new ethnonym. It turns out, the Russians stole their name… LOL

He further wrote: “If you were Slavs and not Ugrofins, you would understand well what the word “ukrayaty” means in the Ukrainian language.”

I am actually a Western Slav and the word means “to slice off”. It is etymologically related to “Ukraine” in the sense, “the edge”. I don’t quite understand however why this polonism is relevant.

But another belief of the Ukrainian nationalists is that the Russians are Ugrogins and not Slavs. Ukrainian historiography attempts from the start to divide genetically the people of Ukraine and Russia. The more crude versions resort to Russophobic canards such as the assertion that the Russians are slavicised Ugrofins, who have apparently, not only stolen the name Rus’ but also the Slavic language, and the history of Ukrainians. This legend about the katsaps (der. meaning “Russian”), who stole the name Rus’ comes from the Polish literature much like the claims about Moscovia.

No originality in their bullshit…

Simple search of the internet of “Muscovites stole the name Rus'” yields thousands of results in Ukrainian and tens of thousands in Russian. This isn’t something marginal. 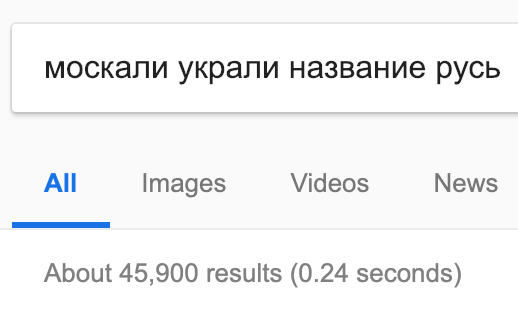