This has dismayed Ukrainian nationalists:

Stephan Khmara says: “People, who have a positive attitude towards Muscovy are not Ukrainians, they are idiots.”

Stepan Khmara is ashamed almost 50% of his countrymen, despite the war, still positively have positive attitude towards Russia. He thinks that half of the country are good “Little Russians” and “Moskovske bydlo”. He invokes history from the Holodomor and Soviet takeover of Western Ukraine. He bemoans the fact that even in Western Ukraine, 31% of the respondents also had positive attitude towards Russia.

Positive attitudes towards Russia are on the rise in Ukraine.

Andriy Mishchenko is quite a work:

“Everyone, the people, the government is guilty in the figure 48% -of Ukrainians, who during war think positively about Russia. The government did not set people for war, did not set the economy to martial law, did not block transport corridors to the enemy, did not institute visas and did not break diplomatic ties. The government sent a message that you can have a contact with the enemy, trade with enemy, do business… Also, all those war years, the Moscow Church, which sets Ukrainians against Ukraine, was working successfully… Now there also appeared many “Ukrainian” TV channels, Inter, 112, NewsONE that have an aggressively pro-Russian [editorial] policy…”

Maidan veteran, Oles’ Doniy points out that Ukrainians have always liked the Russians more than the Russians loved them back… 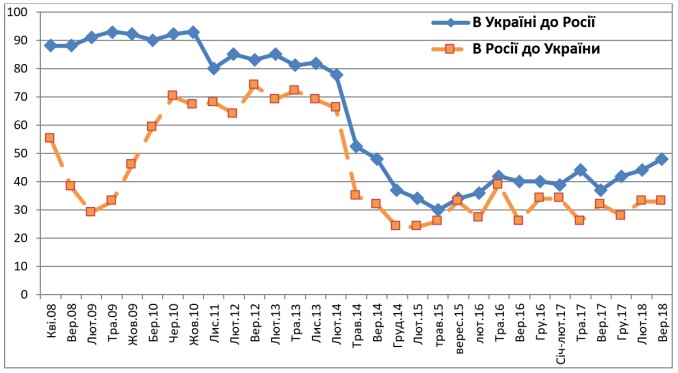 I would say official Russian propaganda has a great deal to do with this. The Russian public has hardly ever heard about Ukraine before the 2013, and it was usually in connection with anti-Russian policy. Today, Russian official propaganda prefers to show Ukrainians as nationalistic idiots because it helps take attention away from failures of the Kremlin. I am not sure the Kremlins even know how to work with the other Ukraine.

Doniy also thinks the positive attitude towards Russia correlates with mistrust of the government. People see that the official propaganda in Ukraine is aimed at Russia. Poroshenko’s reelection campaign is all very patriotic but dislike of Russia is not enough now.