This is a build upon the ideas in this post. I would like to explore this idea…

There are several reasons:

1) There has likely never been a plan to create Novorossiya in the first place.

Despite the claim that Russia planned to seize all eight South-Eastern regions of Ukraine, that is: Odessa, Nikolaev, Kherson, Dneproperovsk, Zaporozhye, Donetsk, Lugansk, Kharkov, nothing indicates the Kremlin ever had such a plan. What is indicative is that the Russian media have, from the very start of the pro-Russian protests in the South-East, referred to the protesters as “supporters of federalisation”. Hence, if the Kremlin ever had any plans to create Novorossiya, it would have been a federal region within Ukraine. Later in this post, I will explain the logic behind such thinking.

2) The demographics don’t make most of it a Russian land.

As I have pointed out before, the Russian ethnic identification predominates only in the major cities of the Donbass. It is therefore no surprise that outside the Donbass, the intensity of protests was far lower, and as my observation has it, these protests did not bear a separatist character. As far as I can judge, outside Donbass, only the regional administration building in Kharkov was seized by the pro-Russian protesters.

In Kharkov, Dnepropetrovsk, Odessa, the local pro-Russian protesters were mostly Sovoks opposed to the Banderisation of Ukraine, and the illegal usurpation of power by the pro-Western Euromaidan. This crowd was brutalised by local Right Sector street thugs recruited from the ranks of football ultras. Below is a map of the birthplaces of soldiers who died in the military operation against the Donbass. As you can see, Dnepropetrovsk provided most meat for the grinder. 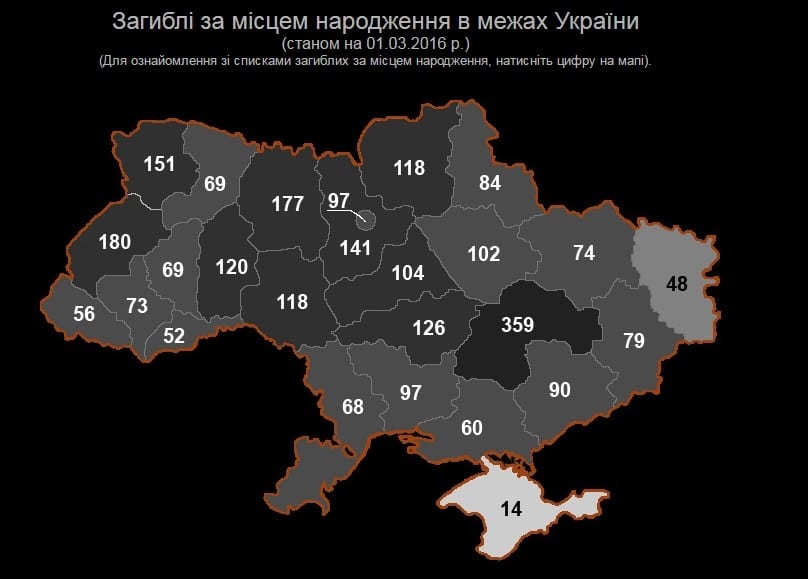 The people that claim that the Kremlin betrayed Novorossiya want to make us believe that the Kremlin ought to have occupied vast territories for a handful of commies that could not even hold against a bunch of fashy ultras.

3) Novorossiya would be economically unviable being a vast unrecognised territory, and her defence would be difficult.

Novorossiya would certainly be an internationally unrecognised territory, with all the economic joys that come out of it. For instance, Odessa would die as a port. Every single port of Novorossiya would die, and that’s why I guess no serious effort was ever made to seize Mariupol in Donbass during the war. The occupation of the territory would inevitably create millions of refugees. If you think the war in Donbass created a crisis, imagine that several times over! There are serious issues with economically integrating the rump Donbass territory with Russia, now imagine the same issues but several times larger.

Novorossiya does not have natural borders with Ukraine, which would allow for constant incursions of subversive elements from Ukraine, and artillery shelling the like we see in the Donbass today. I believe that to make Novorossiya secure, invasion, occupation and pacification of the rest of Ukraine would be needed. That is an enormous undertaking for Russia, something that could be hardly justified in 2014.

34 thoughts on “Why Novorossiya Wasn’t Created”